We need to release another quick ISO because most of the QT apps stopped working.

To make this not too long, we use 2 packages that allow for the sync between GTK and QT in terms of theming, namely qt5-styleplugins and qt6gtk2. Now…it is not as simple, since these packages need to be rebuilt every time the core QT gets an update.

I thought we fixed that…but apparently they need to be rebuilt against the proper QT version. In essence these packages are automatically built by the Chaotic AUR servers, against whatever the AUR version of QT is. But we ship with a different version of QT, thus making these packages not work anymore…and so no QT app can be opened. This is a very bad issue.

To properly fix it is not that difficult fortunately, so please follow these steps.

Open the file /etc/pacman.conf as root and make sure these two are in the same order:

First is the TROMrepo repo and then is the Chaotic AUR one. Save. Open Add/Remove Software and click the menu, then Refresh Databases. Do all of the updates!

Let’s make a script that will do everything for you. Go to .local/bin/ and create an empty file, let’s call it “clean-tromjaro”. Add this to it:

Save. Right click it, then Properties, Permissions and then “allow this file to run as a program”. Open the terminal and do: clean-tromjaro.

That should be it. We are removing more unnecessary packages and files.

For the sake of it reboot the computer again.

We didn’t just fix that bad issue, we also managed to now sync fonts too, across GTK and QT, plus fixed some QT apps that were not themed before…so in terms of consistency we improved more. Now we have a much cleaner way of doing this and more robust. Check this video out. All of these are: GTK+XFWM, simple GTK, GTK+Libadwaita, QT5, QT6, and flatpak. The left side workspace is full of GTKs and a flatpak, the right side the QTs:

Now keep in mind that the vast majority of distros can only theme 2 of such types (max) and they don’t even sync the font or icons most of the time. And I know no other distro to sync them all.

Also note that some of these apps may not fully switch to the new theme/icon set if they are open while you change them. At times flatpaks, at times some QT apps…but restarting them fixes it. Maybe we will find a solution for this in the future, but for now it is not a big deal.

We did some simple tweaks via the Lightdm Settings, as such 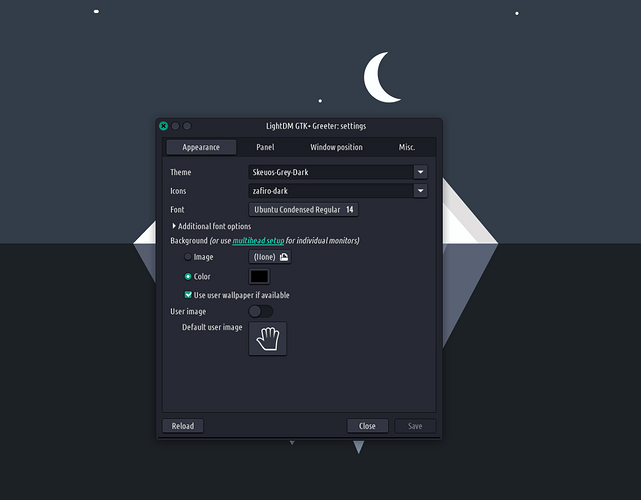 It is a more neutral theme and we added the panel on top. That can be done via /etc/lightdm/lightdm-gtk-greeter.conf add a line panel-position = top. If that line is already there edit it. I don’t know why you can’t change that from the GUI…

I asked my sister the other day to reboot her TROMjaro laptop and took her 5 minutes to understand how. I can blame her

, but it is also true that it may not have been that obvious. Hopefully now it is. And we have names for categories too. 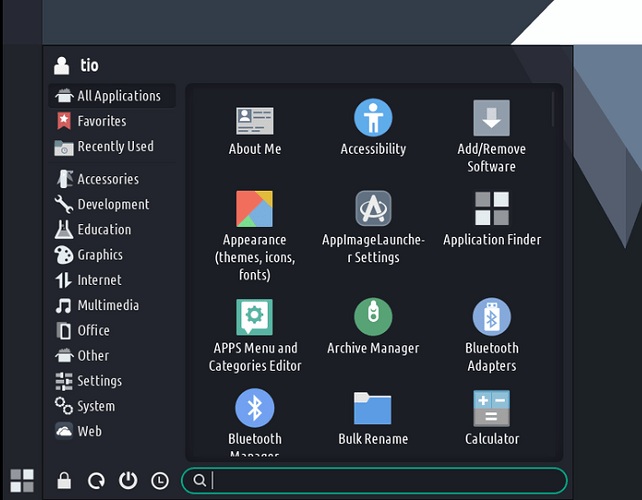 As you can see you have fast access to reboot, shut down, suspend and lock. You too can do these easily via the settings of the app-menu. Right click it, properties, and tweak a few things. It is damn easy.

I know I promised to not make you do “manual labor” and this is the goal here. To have TROMjaro working and we stress for you and fix things and then push the updates to you. Hopefully that’s how it is going to be more and more…we’ve already taken advantage of this approach that we first introduced in the previous release. We changed a bunch of things to make the theming, fonts and icons sync better, and all happened “behind the curtains” and pushed the update to you all. But we still had a few remaining files that needed to be cleaned-up and we had to fix the QT issue properly…

Now I think we are good. We control all of the files that we need to push fixes to TROMjaro without asking you to do them manually. We improve!

Grab it from here.